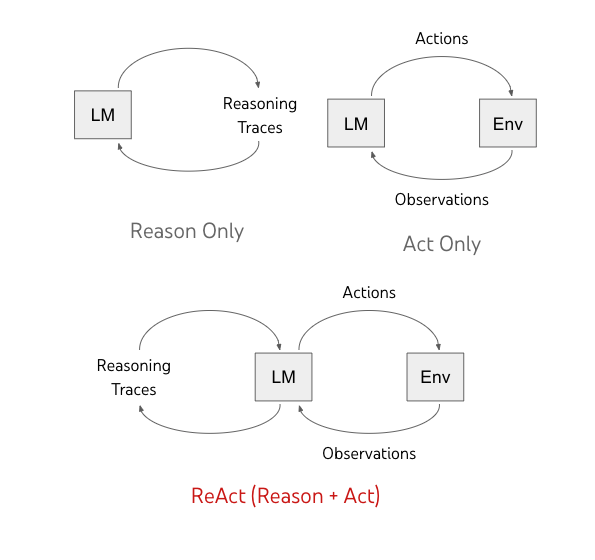 Recent advances have expanded the applicability of language models (LM) to downstream tasks. On one hand, existing language models that are properly prompted, via chain-of-thought, demonstrate emergent capabilities that carry out self-conditioned reasoning traces to derive answers from questions, excelling at various arithmetic, commonsense, and symbolic reasoning tasks. However, with chain-of-thought prompting, a model is not grounded in the external world and uses its own internal representations to generate reasoning traces, limiting its ability to reactively explore and reason or update its knowledge. On the other hand, recent work uses pre-trained language models for planning and acting in various interactive environments (e.g., text games, web navigation, embodied tasks, robotics), with a focus on mapping text contexts to text actions via the language model’s internal knowledge. However, they do not reason abstractly about high-level goals or maintain a working memory to support acting over long horizons.

ReAct enables language models to generate both verbal reasoning traces and text actions in an interleaved manner. While actions lead to observation feedback from an external environment (“Env” in the figure below), reasoning traces do not affect the external environment. Instead, they affect the internal state of the model by reasoning over the context and updating it with useful information to support future reasoning and acting.

We focus on the setup where a frozen language model, PaLM-540B, is prompted with few-shot in-context examples to generate both domain-specific actions (e.g., “search” in question answering, and “go to” in room navigation), and free-form language reasoning traces (e.g., “Now I need to find a cup, and put it on the table”) for task solving.

The synergy between reasoning and acting allows the model to perform dynamic reasoning to create, maintain, and adjust high-level plans for acting (reason to act), while also interacting with the external environments (e.g., Wikipedia) to incorporate additional information into reasoning (act to reason).

We conduct empirical evaluations of ReAct and state-of-the-art baselines across four different benchmarks: question answering (HotPotQA), fact verification (Fever), text-based game (ALFWorld), and web page navigation (WebShop). For HotPotQA and Fever, with access to a Wikipedia API with which the model can interact, ReAct outperforms vanilla action generation models while being competitive with chain of thought reasoning (CoT) performance. The approach with the best results is a combination of ReAct and CoT that uses both internal knowledge and externally obtained information during reasoning.

On ALFWorld and WebShop, ReAct with both one-shot and two-shot prompting outperforms imitation and reinforcement learning methods trained with ~105 task instances, with an absolute improvement of 34% and 10% in success rates, respectively, over existing baselines.

We also explore human-in-the-loop interactions with ReAct by allowing a human inspector to edit ReAct’s reasoning traces. We demonstrate that by simply replacing a hallucinating sentence with inspector hints, ReAct can change its behavior to align with inspector edits and successfully complete a task. Solving tasks becomes significantly easier when using ReAct as it only requires the manual editing of a few thoughts, which enables new forms of human-machine collaboration.

We present ReAct, a simple yet effective method for synergizing reasoning and acting in language models. Through various experiments that focus on multi-hop question-answering, fact checking, and interactive decision-making tasks, we show that ReAct leads to superior performance with interpretable decision traces.

ReAct demonstrates the feasibility of jointly modeling thought, actions and feedback from the environment within a language model, making it a versatile agent that is capable of solving tasks that require interactions with the environment. We plan to further extend this line of research and leverage the strong potential of the language model for tackling broader embodied tasks, via approaches like massive multitask training and coupling ReAct with equally strong reward models.

We would like to thank Jeffrey Zhao, Dian Yu, Nan Du, Izhak Shafran and Karthik Narasimhan for their great contribution in this work. We would also like to thank Google’s Brain team and the Princeton NLP Group for their joint support and feedback, including project scoping, advising and insightful discussions.