The Amazon Chime SDK is a set of real-time communications components that developers can use to add audio, messaging, video, and screen-sharing to your web and mobile applications. Amazon Chime SDK PSTN audio integration with Amazon Lex enables builders to develop conversational interfaces for calls to or from the public telephone network. You can now build AI-powered self-service applications such as conversational interactive voice response systems (IVRs), virtual agents, and other telephony applications that use Session Initiation Protocol (SIP) for voice communications.

In addition, we have launched several new features. Amazon Voice Focus for PSTN provides deep learning-based noise suppression to reduce unwanted noise on calls. You can also now use machine learning (ML)-driven text-to-speech in your application through our native integration to Amazon Polly. All features are now directly integrated with Amazon Chime SDK PSTN audio.

In this post, we teach you how to build a conversational IVR system for a fictitious travel service that accepts reservations over the phone using Amazon Lex.

For this solution, we use the following components:

Amazon Lex natively integrates with Amazon Polly to provide text-to-speech capabilities. In this post, we also enable Amazon Voice Focus to reduce background noise on phone calls. In a previous post, we showed how to integrate with Amazon Lex v1 using the API interface. That is no longer required. The heavy lifting of working with Amazon Lex and Amazon Polly is now replaced by a few simple function calls. 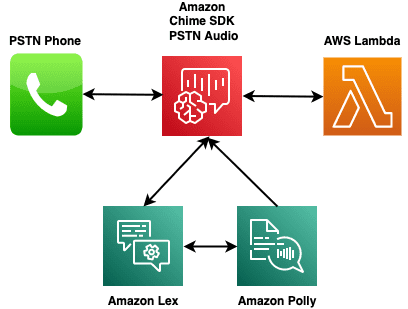 To help you learn to build using the Amazon Chime SDK PSTN audio service, we have published a repository of source code and documentation explaining how that source code works. The source code is in a workshop format, with each example program building upon the previous lesson. The final lesson is how to build a complete Amazon Lex-driven chatbot over the phone. That is the lesson we focus on in this post.

As part of this solution, you create the following resources:

The demo code is deployed in two parts. The Amazon Lex chatbot example is one of a series of workshop examples that teach how to use Amazon Chime SDK PSTN audio. For this post, you complete the following high-level steps to deploy the chatbot:

We go through each step in detail.

You must have the following prerequisites:

To create your chatbot, complete the following steps:

This must be in either us-east-1 or us-west-2, depending on where you deployed the Amazon Chime SDK resources using AWS CDK.

This example doesn’t need that protection, but for your own bot creation you should select this option accordingly. 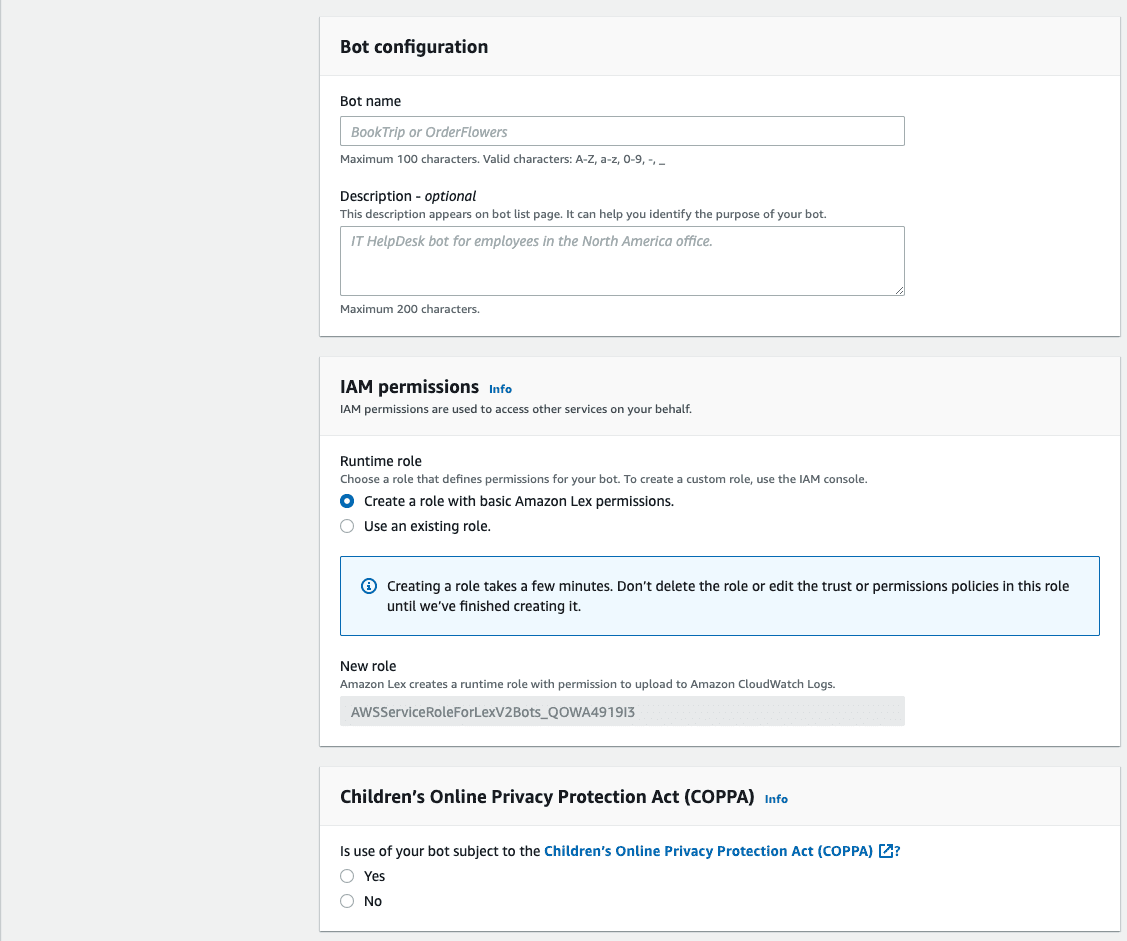 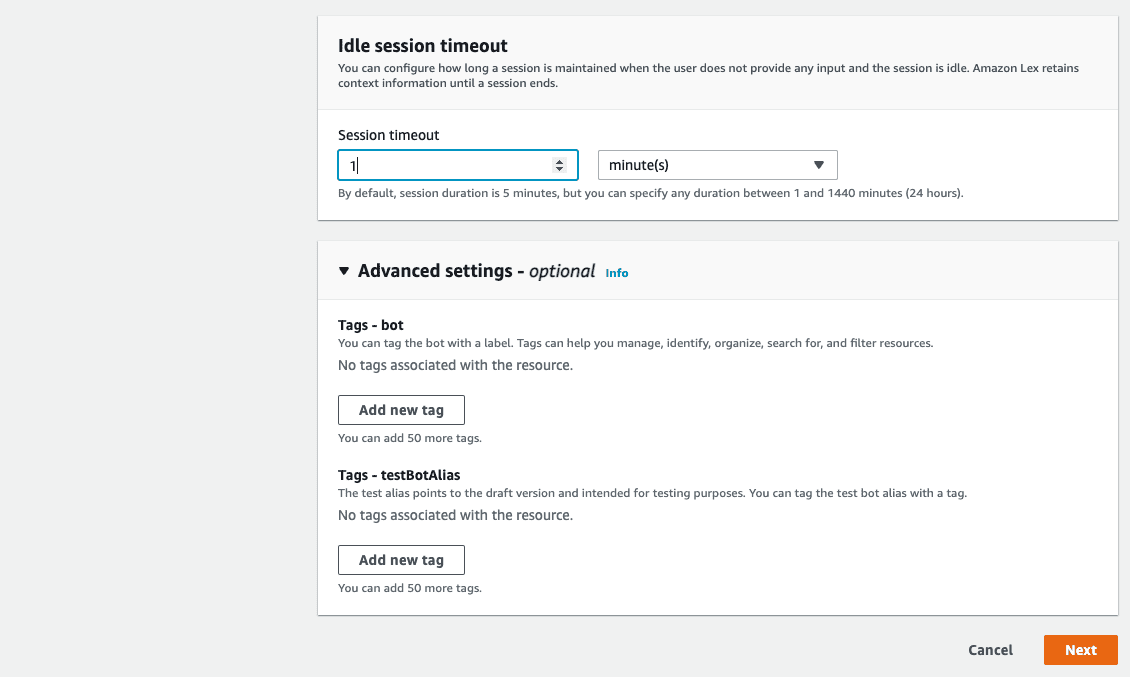 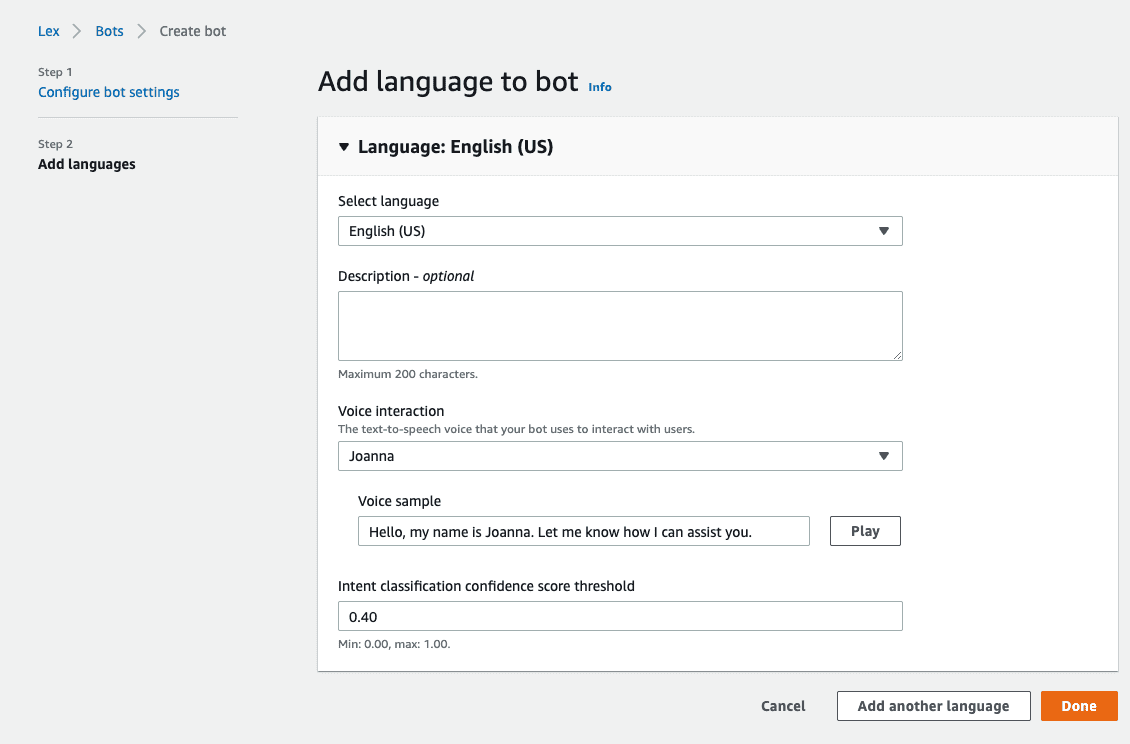 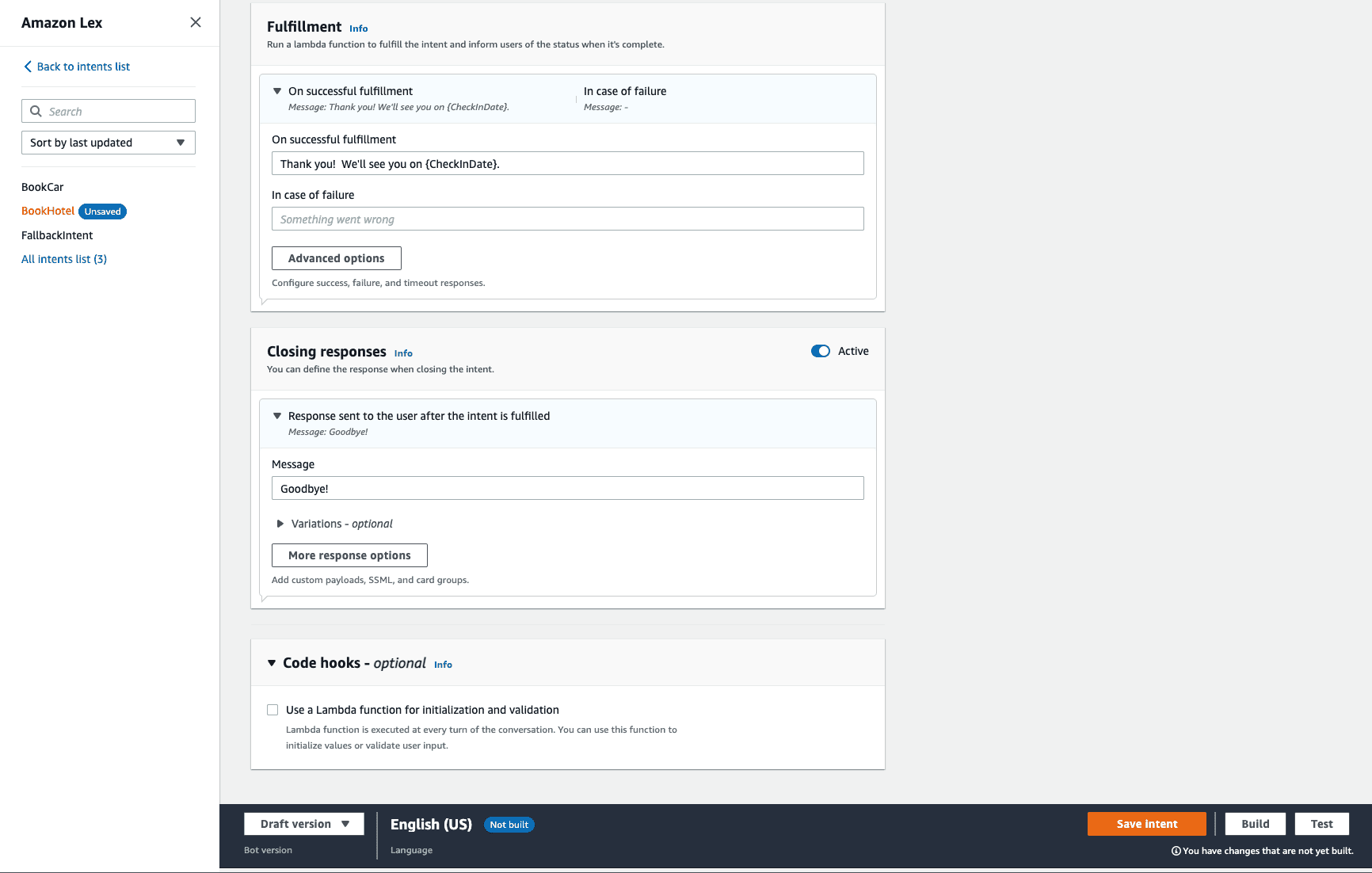 The build process takes a few moments to complete. When it’s finished, you can test the bot on the Amazon Lex console.

You have now built the bot. Next, we create a version.

Your new version is now listed on the Versions page.

Next, we create an alias.

If you had more than one version of the bot, you could choose the appropriate version here.

The alias is now listed on the Aliases page.

In the preceding code, provide the resource ARN (located directly above the text box), which is the ARN for the bot alias. Also provide your account number and specify the Region you’re deploying into (us-east-1 or us-west-2). That defines the ARN of the PSTN audio control plane in your account.

Congratulations! You have configured an Amazon Lex bot!

In a real chatbot application, you would almost certainly implement a Lambda function to process the intents. This demo program focuses on explaining how to connect to Amazon Chime SDK PSTN audio, so we don’t go into that level of detail. For more information, refer to Add the Lambda Function as a Code Hook.

You can get the code for the entire workshop by cloning the repository:

Deploy the common resources for the workshop

This workshop uses the AWS CDK to automate the deployment of all needed resources (except the Amazon Lex bot, which you already did). To deploy, run the following code from your terminal:

The AWS CDK deploys the resources. We do the bootstrap step to make sure that AWS CDK is properly initialized in the Region you’re deploying into. Note that these examples use AWS CDK version 2.

The repository has a series of lessons that are designed to explain how to develop PSTN audio applications. We recommend reviewing these documents to understand the basics using the first few sample programs. You can then review the Lambda sample program folder. Lastly, follow the steps to configure and then deploy your code. In the terminal, enter the following command:

Configure your Lambda function to use the Amazon Lex bot ARN

Open the src/index.ts source code file for the Lambda function and edit the variable botAlias near the top of the file (provide the ARN you copied earlier):

You can now deploy the bot with yarn deploy and swap the new Lambda function into PSTN audio with yarn swap. You can also note the welcome text in the startBotConversationAction object:

Amazon Lex starts the bot and uses Amazon Polly to read that text. This gives the caller a greeting, and tells them what they should do next.

The following example adds more actions to what we learned in the Call and Bridge Call lesson. The NEW_INBOUND_CALL event arrives and is processed the same way. We enable Amazon Voice Focus (which enhances the ability of Amazon Lex to understand words) and then immediately hand the incoming call off to the bot with a StartBotConversation action. An example of that action looks like the following object:

When the bot returns an ACTION_SUCCESSFUL event, the data collected by the Amazon Lex bot is included in the event. The collected data from the bot is included, and your Lambda function can use that data if needed. However, a common practice for building Amazon Lex applications is to process in the data with the function associated with the Amazon Lex bot. Examples of the event and the returned action are provided in the workshop documentation for this session.

The following diagram shows the sequence of calls made between PSTN audio and the Lambda function: 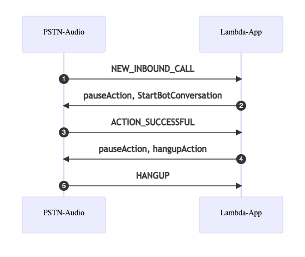 For a more detailed explanation of the operation, refer to the workshop documentation.

To clean up the resources used in this demo and avoid incurring further charges, complete the following steps:

The AWS CloudFormation stack created by the AWS CDK is destroyed, removing all the allocated resources.

In this post, you learned how to build a conversational interactive voice response (IVR) system using Amazon Lex and Amazon Chime SDK PSTN audio. You can use these techniques to build your own system to reduce your own customer call resolution times and automate informational responses on your customers calls.

Greg Herlein has led software teams for over 25 years at large and small companies, including several startups. He is currently the Principal Evangelist for the Amazon Chime SDK service where he is passionate about how to help customers build advanced communications software.