Fraud plagues many online businesses and costs them billions of dollars each year. Financial fraud, counterfeit reviews, bot attacks, account takeovers, and spam are all examples of online fraud and malicious behaviors.

Although many businesses take approaches to combat online fraud, these existing approaches can have severe limitations. First, many existing methods aren’t sophisticated or flexible enough to detect the whole spectrum of fraudulent or suspicious online behaviors. Second, fraudsters can evolve and adapt to deceive simple rule-based or feature-based methods. For instance, fraudsters can create multiple coordinated accounts to avoid triggering limits on individual accounts.

However, if we construct a full interaction graph encompassing not only single transaction data but also account information, historical activities, and more, it’s more difficult for fraudsters to conceal their behavior. For example, accounts that are often connected to other fraudulent-related nodes may indicate guilt by association. We can also combine weak signals from individual nodes to derive stronger signals about that node’s activity. Fraud detection with graphs is effective because we can detect patterns such as node aggregation, which may occur when a particular user starts to connect with many other users or entities, and activity aggregation, which may occur when a large number of suspicious accounts begin to act in tandem.

In this post, we show you how to quickly deploy a financial transaction fraud detection solution with Graph Neural Networks (GNNs) using Amazon SageMaker JumpStart.

To illustrate why a Graph Neural Network is a great fit for online transaction fraud detection, let’s look at the following example heterogeneous graph constructed from a sample dataset of typical financial transaction data. 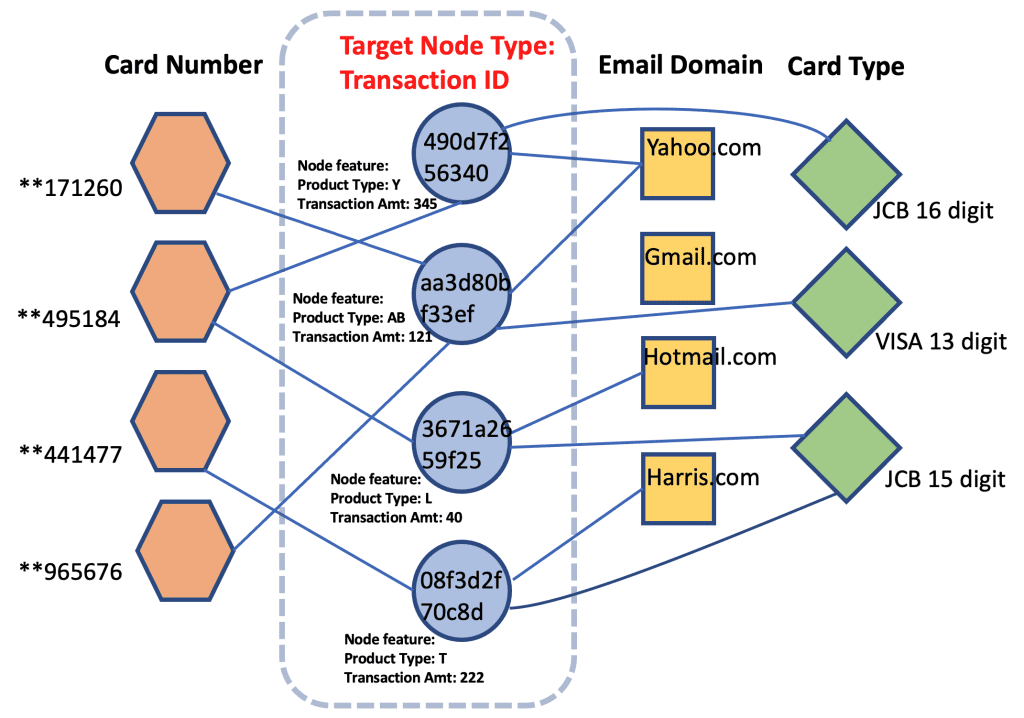 The sample dataset contains not only features of each transaction, such as the purchased product type and transaction amount, but also multiple identity information that could be used to identify the relations between transactions. That information can be used to construct Relational Graph Convolutional Networks (R-GCNs). In the preceding example graph, the node types correspond to categorical columns in the sample dataset such as card number, card type, and email domain.

The solution shown in this post uses Amazon SageMaker and the Deep Graph Library (DGL) to construct a heterogeneous graph from tabular data and train an R-GCNs model to identify fraudulent transactions.

At a high level, the solution trains a graph neural network to accept an interaction graph, as well as some features about the users in order to classify those users as potentially fraudulent or not. This approach ensures that we detect signals that are present in the user attributes or features, as well as in the connectivity structure, and interaction behavior of the users.

This solution employs the following algorithms:

By default, this solution uses synthetic datasets that are created to mimic typical examples of financial transactions datasets. We demonstrate how to use your own labeled dataset later in this post.

The outputs of the solution are as follows:

In this solution, we focus on the SageMaker components, which include two main parts: 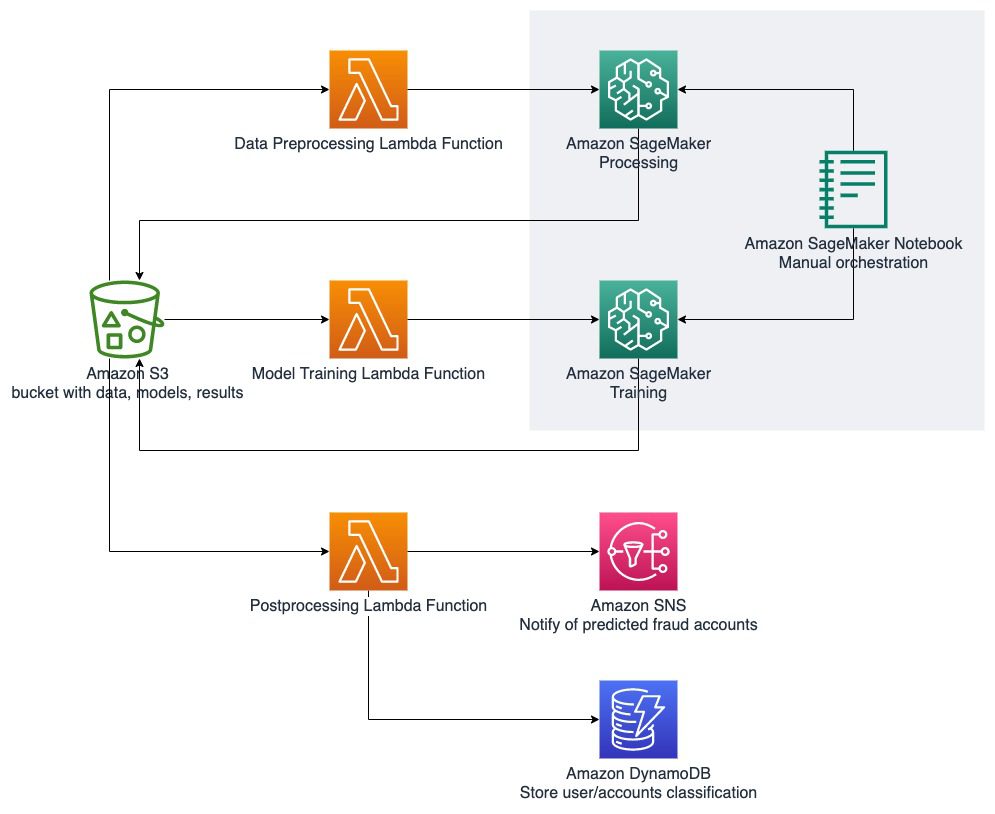 To try out the solution in your own account, make sure that you have the following in place:

When the Studio instance is ready, you can launch Studio and access JumpStart. JumpStart solutions are not available in SageMaker notebook instances, and you can’t access them through SageMaker APIs or the AWS Command Line Interface (AWS CLI).

To launch the solution, complete the following steps:

The default dataset used in this solution is a synthetic dataset created to mimic typical examples of financial transactions dataset that many companies have. The dataset consists of two tables:

The two tables can be joined together using the unique identified-key column TransactionID. The following screenshot shows the first five observations of the Transactions dataset.

The following screenshot shows the first five observations of the Identity dataset.

Besides the unique identifier column (TransactionID) to identify each transaction, there are two types of predicting columns and one target column:

The goal is to fully utilize the information in the predicting columns to classify each transaction (each row in the table) to be either fraud or not fraud.

The solution notebook contains code that downloads the default synthetic datasets and uploads them to the input Amazon Simple Storage Service (Amazon S3) bucket provisioned by the solution.

To use your own labeled datasets, before running the code cell in the Upload raw data to S3 notebook section, edit the value of the variable raw_data_location so that it points to the location of your own input data.

In the Data Visualization notebook section, you can run the code cells to visualize and explore the input data as tables.

If you’re using your own datasets with different data file names or table columns, remember to also update the data exploration code accordingly.

All the columns in the relational table are classified into one of the following three types for data transformation: 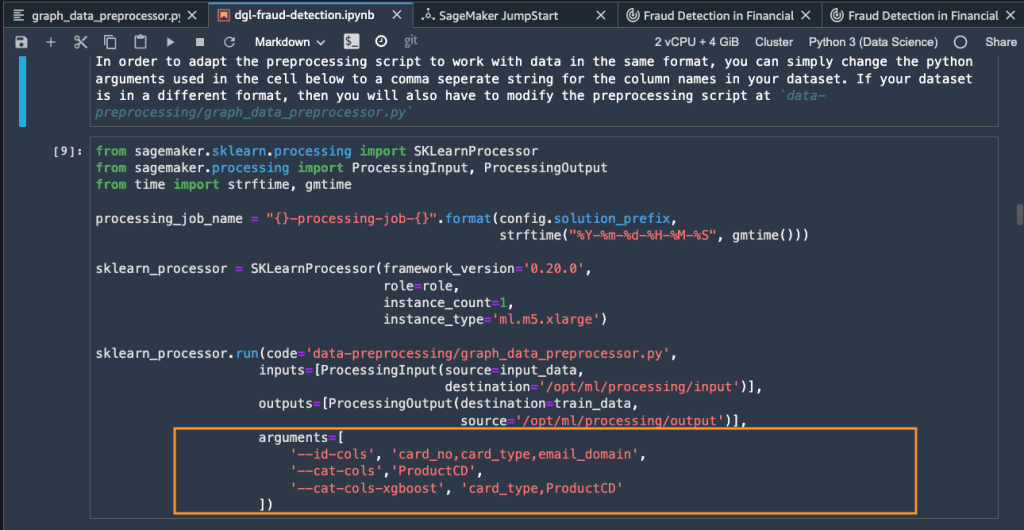 If you’re using your own data and your data is in the same format as the default synthetic dataset but with different column names, you simply need to adapt the Python arguments in the notebook code cell according to your dataset’s column names. However, if your data is in a different format, you need to modify the following section in the data-preprocessing/graph_data_preprocessor.py Python script. 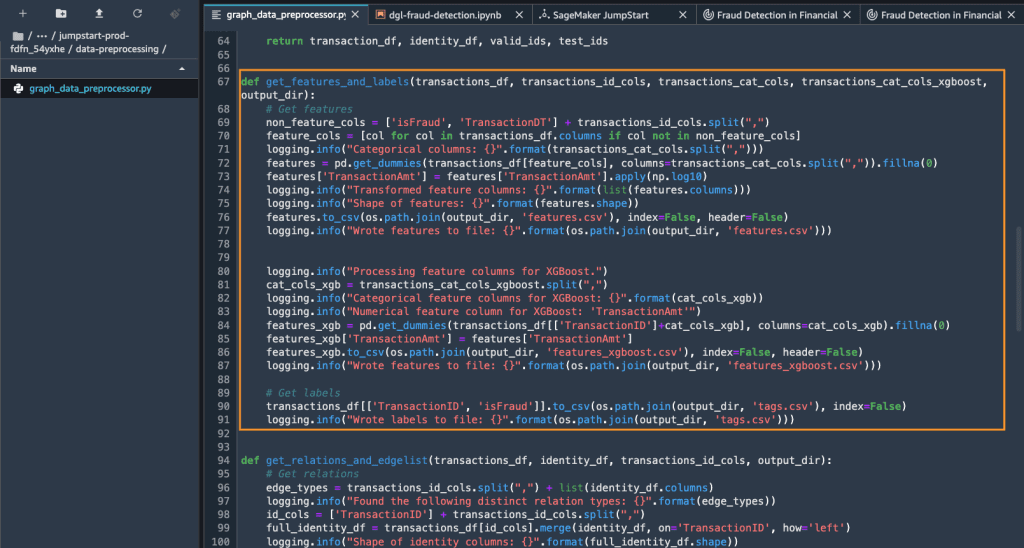 We divide the dataset into training (70% of the entire data), validation (20%), and test datasets (10%). The validation dataset is used for hyperparameter optimization (HPO) to select the optimal set of hyperparameters. The test dataset is used for the final evaluation to compare various models. If you need to adjust these ratios, you can use the command line arguments --train-data-ratio and --valid-data-ratio when running the preprocessing Python script.

When the preprocessing job is complete, we have a set of bipartite edge lists between transactions and different device ID types (suppose we’re using the default dataset), as well as the features, labels, and a set of transactions to validate our graph model performance. You can find the transformed data in the S3 bucket created by the solution, under the dgl-fraud-detection/preprocessed-data folder. 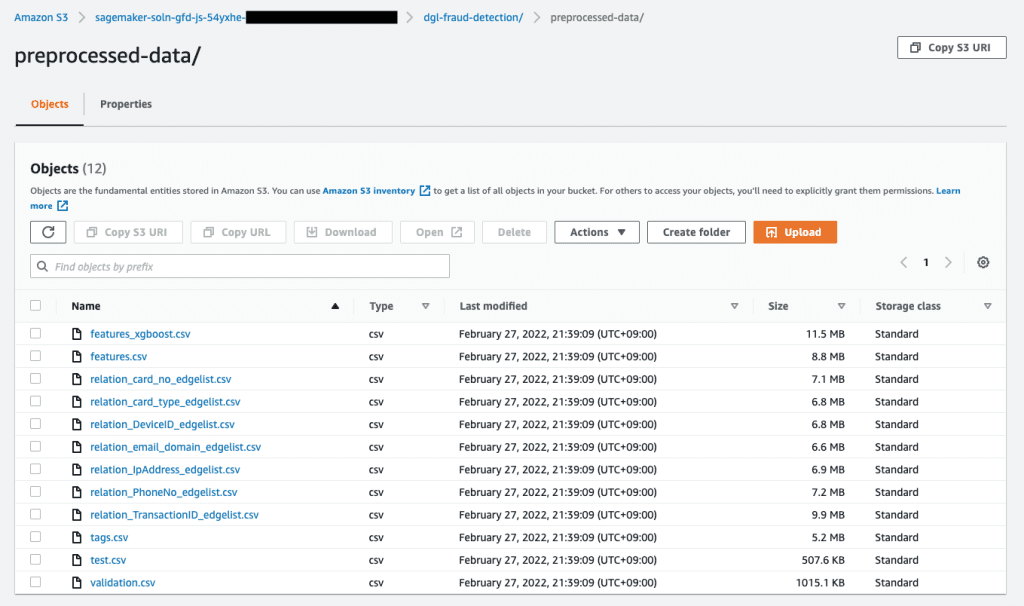 Before diving into training a graph neural network with the DGL, we first train an XGBoost model with HPO as the baseline on the transaction table data.

Train the Graph Neural Network using the DGL with HPO

Graph Neural Networks work by learning representation for nodes or edges of a graph that are well suited for some downstream tasks. We can model the fraud detection problem as a node classification task, and the goal of the GNN is to learn how to use information from the topology of the sub-graph for each transaction node to transform the node’s features to a representation space where the node can be easily classified as fraud or not.

Specifically, we use a relational graph convolutional neural networks model (R-GCNs) on a heterogeneous graph because we have nodes and edges of different types.

For this post, we use the DGL, with MXNet as the backend deep learning framework. We create a SageMaker MXNet estimator and pass in our model training script (sagemaker_graph_fraud_detection/dgl_fraud_detection/ train_dgl_mxnet_entry_point.py), the hyperparameters, as well as the number and type of training instances we want to use. When the training is complete, the trained model and prediction result on the test data are uploaded to Amazon S3.

When you’re finished with this solution, make sure that you delete all unwanted AWS resources to avoid incurring unintended charges. In the Delete solution section on your solution tab, choose Delete all resources to delete resources automatically created when launching this solution.

With either approach, you still need to manually delete any extra resources that you may have created in this notebook. Some examples include extra S3 buckets (in addition to the solution’s default bucket), extra SageMaker endpoints (using a custom name), and extra Amazon Elastic Container Registry (Amazon ECR) repositories.

In this post, we discussed the business problem caused by online transaction fraud, the issues in traditional fraud detection approaches, and why a GNN is a good fit for solving this business problem. We showed you how to build an end-to-end solution for detecting fraud in financial transactions using a GNN with SageMaker and a JumpStart solution. We also explained other features of JumpStart, such as using your own dataset, using SageMaker algorithm containers, and using HPO to automate hyperparameter tuning and find the best tuning job to make predictions.

To learn more about this JumpStart solution, check out the solution’s GitHub repository.

Xiaoli Shen is a Solutions Architect and Machine Learning Technical Field Community (TFC) member at Amazon Web Services. She’s focused on helping customers architecting on the cloud and leveraging AWS services to derive business value. Prior to joining AWS, she was a senior full-stack engineer building large-scale data-intensive distributed systems on the cloud. Outside of work she’s passionate about volunteering in technical communities, traveling the world, and making music.

Vedant Jain is a Sr. AI/ML Specialist Solutions Architect, helping customers derive value out of the Machine Learning ecosystem at AWS. Prior to joining AWS, Vedant has held ML/Data Science Specialty positions at various companies such as Databricks, Hortonworks (now Cloudera) & JP Morgan Chase. Outside of his work, Vedant is passionate about making music, using Science to lead a meaningful life & exploring delicious vegetarian cuisine from around the world.